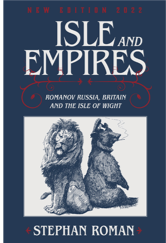 Relations between Russia and Britain are now at their lowest point since the Crimean War of 1853-1856 and the darkest days of the Cold War.
Vladimir Putin’s invasion of Ukraine has damaged any hope of co-operation between the two countries and has once again put the Anglo-Russian relationship under enormous strain. Putin sees himself as the inheritor and protector of a Russian imperial tradition which stretches back to the reign of Peter the Great, the first Tsar to visit Britain in 1698.
In this second edition of Isle and Empires: Romanov Russia, Britain, and the Isle of Wight author Stephan Roman explores the tensions and conflicts that shaped the relationship between Russia and Britain during the rule of the Romanov Tsars. This was a pivotal period in the history of both countries and laid the foundations for the current tensions between Russia and Britain.
At the heart of this story lies the Isle of Wight, an island off the south coast of England. Here both the Russian Imperial family and their political opponents,
spent time and helped shape the future relationship between the two Empires.
This would culminate in the visit of Tsar Nicholas II and his family to Cowes in 1909, and it set the seal on the new Anglo-Russian partnership which would last until the 1917 Bolshevik revolution.
The Second Edition of Isle and Empires is a journey into a world of Imperial glory and power, family rivalry, wars, and alliances. It is also the story of Russia’s revolutionaries and radicals, and the refugees fleeing Tsarist oppression who found shelter and safety in Britain and the Isle of Wight during the nineteenth and twentieth centuries.
We should never underestimate the ways in which the past shapes both the present and the future. The second edition of Isle and Empires is a timely and much needed guide into understanding the tangled story of Anglo-Russian relations at a key moment in European history.
Stephan Roman studied History at the University of Oxford and trained in library and information science at the University of Sheffield. He has held senior positions in the British Council working in Europe, Asia and the Middle East. He became a Companion of the Order of St Michael and St George in 2012 and was awarded the Romanian Order of Merit for Services to Culture in 2004. Stephan is based in Hampton, Richmond upon Thames.

Join us in the library from 7pm for drinks.  Meeting starts at 7.30pm followed by supper if booked.
Two course meal with wine – £22 per head – please book your supper before Tuesday 1st November 2022.
This meeting will be face to face in the York Medical Society rooms and also shared via Zoom.
Please confirm your preference for in person or virtual attendance and if you want to join us for supper afterwards.